I had such and AWESOME weekend. Friday night was spent baking and crafting like a mad woman (and the help of two amazing people). 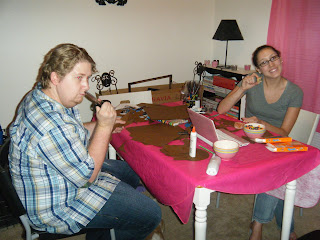 I decided for the contest I would do:
Vanilla Entry: Vanilla Cake infused with fresh Peach Puree and a Fresh Peach Buttercream 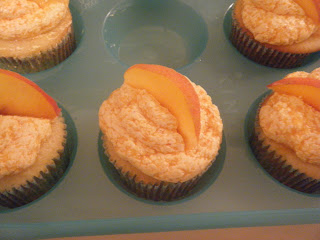 Freestyle Entry: Banana cake swirled with Nutella and a Nutella Buttercream and a little candy banana on top 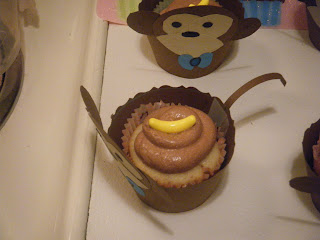 Well, intially for the Nutella cupcakes, I planned to make chocolate monkeys for the cupcakes, but the BF and I had a chocolate meltdown and things didn't work out as I had planned. So, I started browsing the web and came up with a new game plan. We made custom cupcake wrappers, to personalize my cupcakes. They came out super cute ( and it might lead to something else after seeing the finshed product) and were exactley what I wanted for my cupcakes.

Saturday we were up super early finalizing up everything and off we went. We got to the event location and things were really hustling around, I couldn't believe all the people I saw walking in with their own cupcake entries. I got so nervous, because these entries looked great. Well the event started and their was a ton of people there (I heard at one point, over 1000 people were in attendance) and alot of waiting. After much waiting we got the results...I won!!! I ended up winning: 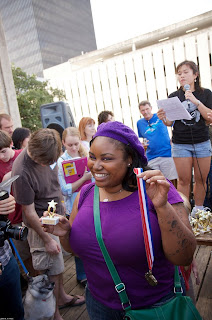 (Photo Courtsey of John of Austin)
Can you F-ing believe it, I was so stoked, because they were a ton of great entries. I got a medal and a cute trophy, and I did an awesome dance!!
I took a ton of pictures, and I thought it would be easier to just post them on my Flickr page, so check them out here.