Hey Everyone….I’m Baaaack! I had a blast visiting my parents and of course have a ton of stuff to share with you guys! So, the drive to my parent’s house is about 12 hours, that’s 12 hours sitting in the car hoping that I can keep my sanity. After my MP3 gave out, I was forced to listen to the radio and boy was that fun. I found that Okalahoma has a whole station dedicated to Indian music (Not Native America…but from India). It was actually really neat, because it was like a pop station, but it was all Indian artists. I also came across the dumbest country song ever. The song was called “Rocking the Beer Gut”, by Trailer Choir. A sample of the lyrics:
Rockin' the beer gut well it's just some extra love around her waist
Rockin' the beer gut she's more than hot, she's everything and with the blue jeans a little tight around her butt
Pretty little girl's rockin' the beer gut
I got pulled over about 3 hours outside of my hometown, by a SMOKIN HOT, Highway State Trooper (Got to love a man in uniform). I was doing 89 in a 75 (yes, I am a speeder) and also was driving in the left lane (which I was informed is only for passing….So that’s what those signs mean…oops my bad!) So, after much batting of the lashes, I was left with just a warning (and no phone number..).
Some of the highlights of my visits with were celebrating my mother’s birthday at Red Lobster…For some reason my mother feels like Red Lobster is a “fancy” restaurant you always go on special occasions. While out shopping with my mother, she realized too late that she had two different shoes on, which caused me to almost pee my pants from laughing so hard, I love my mother!! 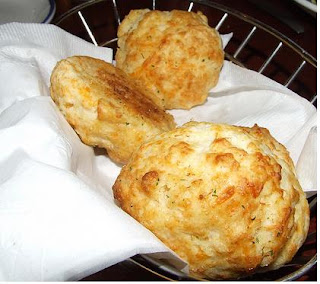 (Gotta Love them Cheddar Bay Biscuits)
On my way back, I stopped at this cutest little Amish bakery and got the BF a Raspberry and Blackberry Pie, and almost got into a fight with a homeless person. See, I was tired and ready to go home when I saw this homeless guy at the intersection. He had some really funny signs so I thought I would be nice and give me a dollar. Well after handing him the dollar I noticed he got this huge grin on his face, and I noticed I was missing a $100.00 out of my wallet. I had accidentally given him the wrong bill and I was faced with the dilemma of getting it back. I am not going to lie, I pulled over, got out and snatched the bill from the guy, running as quickly as I could back to my car… I mean lets be real, was I actually going to be able to reason with a homeless person…So God please FORGIVE me! 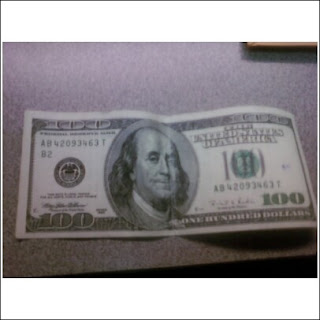 "The Bill"
Well, I plan to post a few more picture…but wanted to share another some of my funny adventures.